If you’ve been watching the Olympics, you’ve certainly seen it: the oddly shaped and curious appearing tape on all parts of the human body.

It’s called Kinesio tape or KT tape.  It was developed in Japan by Dr Kenzo Kase in 1973.  And it’s not just tape, it’s a technique.  Both the tape itself and the way it is applied to the body are fundamentally different from what you see on football players.

Typical athletic tape is cotton based with a zinc oxide adhesive.  It is designed to limit the motion of joints and provide enhanced stability.  Although a myriad technique exist, the basic idea is to apply it in either a basket-weave or circumferential fashion.

Kinesio tape, on the other hand, is a thinner tape designed to approximate the thickness of skin.  It is much more elastic and has an acrylic adhesive.  Specifically, it is designed to NOT restrict the motion of joints.  You can also wear it for several days at a time.

Numerous athletes can be spotted wearing this colorful tape.  It is almost ubiquitous in beach volleyball, with Kerry Walsh Jennings one of the best examples.  They even have fancy printed USA tape now! 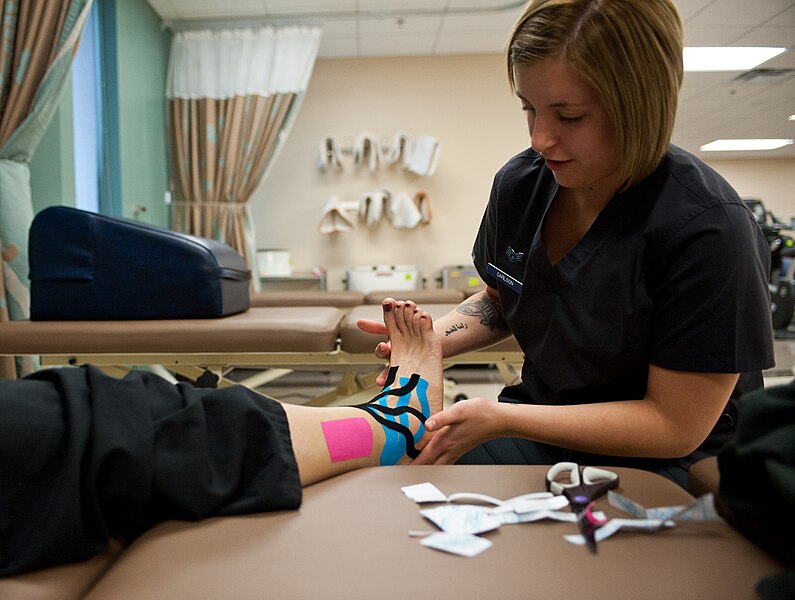 How does it work?

Dr Kase has proposed 4 different mechanisms for how Kinesio tape works:  muscle support, joint support, circulation improvement and pain relief.  More recently, some individuals have suggested that Kinesio tape also helps to reduce injury by improving the sense of proprioception.  This is the sense that helps your body know where the limbs are positioned.

The effect of Kinesio tape is dependent on its application.  It’s a very stretchy tape and the amount of tension on application can dictate its effect.  Also, the direction of application can determine how the various tissues are being supported.  That’s why you see crazy spider designs, wave designs and asterisk designs.

The most frequently cited mechanism for effectiveness of Kinesio tape is in circulation improvement and swelling reduction.  It is thought that this happens by lifting the skin up and away from the vessels of the body, thus creating an easier environment for blood to flow and swelling to drain.

Another mechanism is through activation of the body’s own pain relieving mechanisms.  Again, this is thought to occur by a similar mechanism as improving circulation.  By lifting the skin away from nerve endings, the compression of the skin against the nerves is reduced, thereby reducing pain.

A third mechanism is improving muscle strength.  This occurs via the stretch applied to the tape that creates tension in the skin.  In turn, this improves nerve function and communication that results in increased muscle recruitment and ultimately more strength.

Will it work for me?

Well, yes and no.

The first thing we need to do is look at the research that has been accomplished on it.  Somewhat to my surprise, there has been a fair amount of investigation into whether Kinesio tape is effective.  In fact, there have been so many studies that we can now use a research technique called meta-analysis to combine all the individual studies into one big study.

The most recent meta-analyses have been performed in 2015 and 2014.  Both studies have found no effect of Kinesio tape compared to placebo.  In less scientific language, the authors of a review article in the Journal of Physiotherapy wrote “all available evidence from five different systematic reviews of randomised controlled trials is very consistent: Kinesio Taping just does not work”.

But, these researchers went even further to say “clinicians and Kinesio Taping instructors should be more open to the existing evidence and should acknowledge that this intervention is not as good as it is claimed to be.”  While we might be used to Trump-like language in politics, this level of damnation in scientific discourse is quite unusual.

So, if it doesn’t work, why bother?

In this day and age of doping scandals, taping is a drug-free, risk-free intervention that could theoretically help.  And therein lies the benefit.  Theoretically help.  For an elite-level athlete, just thinking something can help really may benefit you.  Really, it’s that whole placebo effect.

So, as Jim Thornton, president of the National Athletic Trainers’ Association famously exclaimed, “we call that taping your head”.

I’m Stephen Thompson, MD, a sports medicine orthopedic surgeon at EMMC Sports Health. I’m passionate about providing education to help local athletes reach their highest potential, prevent injuries, and know what to do if an injury occurs. In this blog, I discuss sports-related hot topics in the news, share tips that can help athletes excel, and provide information that is helpful to parents of student athletes. I encourage discussion and want to hear what you think about these topics.

Forty-two vintage one cylinder snowmobiles in one race

Forty-two vintage one cylinder snowmobiles in one race